Home October 2019 Investigator could not find clear management structures in place in HSE in...

“I couldn’t find clear management structures in place in the HSE in regard to CervicalCheck”, Dr Gabriel Scally who carried out the inquiry into the CervicalCheck controversy told the Conference.

Dr Scally, who is President of the Epidemiology and Public Health section of the Royal Society of Medicine and Chair of the Soil Association, was speaking on “When things go wrong and will not come right,”’ said the CerivcalCheck inquiry was the hardest, and the best thing, he had ever done in his professional life.

He quoted Kieran Walsh and Stephen Shortall, who have noted that ‘Organisations where failures occur usually lack fundamental management systems for quality review, incident reporting, and performance management. They frequently show little collaboration between managers and clinicians and a lack of coherent clinical leadership. They are often isolated and inward-looking organizations, unwilling to learn from elsewhere. Their staff and patients are likely to be disempowered, vulnerable and poorly placed to raise concerns.’

“That struck a chord with me,” Said Dr Scally. “When I met with staff, people used to say, ‘I did this and now I do this.‘ There were about 30 people in the room and only one person had a job description and that person had a job description only because she had just been appointed. It is no wonder there was no clarity of purpose as to who was responsible for different actions.”

“I also found an absence of any significant professional public health involvement in a public health programme, which struck me as completely ridiculous.”

Dr Scally said screening was always a delicate balance between advantages and disadvantages, and that is why a public health medicine input was required and he was glad that steps were now being taken to address that issue.

“The second set of issues I came across was around the role of clinicians and the practice of clinicians. Accountability is something people are very keen on and there were real difficulties with accountability. There are differences with the use of words, such as ‘should,’ ‘ought’ and ‘must’ and often guidelines have been written where ‘should’ or ‘ought’ rather than ‘must’ are used.

The more serious the potential consequences for the patient, the less likely that patient is to be told if there has been a significant clinical issue with their care.

“That was the problem with the previous HSE Open Disclosure Policy, which meant you only had to engage in Open Disclose if you wished to do so. That kind of fudging is unhelpful to everybody. Open disclosure was fundamental to everything that went wrong in CervicalCheck. The failure to tell patients or offer them the opportunity to know what had happened was catastrophic. Then, some botched attempts at disclosure were made and some of the disclosure were done in an appalling way.

“Clinicians should tell people the truth and this should be as natural to clinical practice as breathing. During the course of my interest in, and involvement in, inquiries, I have come up with my ’inverse disclosure law,’ which runs on the lines that the more serious the potential consequences for the patient, the less likely that patient is to be told if there has been a significant clinical issue with their care.

“I have found situations where, every time a patient falls, it is entered meticulously on a chart but when more serious things happen, there is a quiet conversation about it or it is ignored unless the patient complains and even then the complaint is often ignored also.

Dr Scally said that things were always going wrong in medicine and it was almost inevitable that in something like radiography or histopathology, the errors will occur at times.  “Diagnosis is rarely a binary choice, it is always a judgment issue and where there is room for human judgments there will be errors. It is when and how we respond to those failures that makes a difference for patients.”

“When things go wrong, the patient only basically wants three things – they want to know what went wrong and why it went wrong; essentially to be told the truth.  They want somebody to apologise and they want that apology from somebody with some skin in the game and not by a letter from an acting manager of whom they’ve never heard.  The third thing they really want is to make sure it doesn’t happen to anyone else. They want reassurances that it will not happen again. If those three things are done and done well, the patients concerned may never be totally satisfied but they can be reconciled and there is a far lower chance of their having to resort to legal action to get to the truth and get somebody to admit some degree of liability. “

Dr Scally said changes were needed in clinical practice and he looked forward to seeing changes that would come about as a result of legislation. He said, ‘I am not overly impressed about the protected disclosure system – there are multiple forms to be filled in before disclosure can take place and that is not likely to be helpful.  People should be told the truth and should not have to wait for bureaucratic procedures.”

The current legal system doesn’t introduce grace or compassion and there is an absolute a need for grace and compassion in dealing with these conflictual situations.

He said that there were legal difficulties in dealing with errors in clinical practice. “The current system is deeply flawed. The legal system takes an error, converts it into an injustice and converts that into a financial sum.  It doesn’t bring any significant degrees of comfort to the patient. Sometimes it magnifies the damage, for example if patients and relatives have to sit in court listening to people giving evidence which the patients don’t believe is true. This mitigates against the three points I have outlined.

“I am in favour of introducing new approaches, and we need to move fast in this area.  I think it could be done relatively quickly and should be done in a public health service, like screening and immunisation. That is because they are quite different in that they are a health service reaching out to people and saying ‘Come to us and we will provide you with a service and it will prevent you from developing a disease or detect a disease early.’  When that goes wrong, I think there is an additional requirement on the State to address any errors or failures.

“We need a system where complaints are dealt with and patients recompensed properly for any harm done.  We need a system to ensure that patients don’t have to end up in court and I think that should be introduced sooner than later.  When I worked in the health service in Belfast, we lost so much clinical time in hospitals due to consultants spending time in the High Court. We should also introduce as quickly as possible the concept of agreed evidence so that eminent consultants do not end up providing, at great expense, contradictory expert advice.  I accept that, at the moment, both sides may be giving what they believe is the correct evidence but they happen to differ on what that is.

“The current legal system doesn’t introduce grace or compassion and there is an absolute a need for grace and compassion in dealing with these conflictual situations.

“I have seen the benefits of a different approach with some of the women in the CervicalCheck controversy. When I suggested to them that we needed to organise meetings where they could sit down with clinicians and discuss their differences, my suggestion was met with disbelief and anger from some of the women.  However, subsequently they did meet with the clinicians and it worked out very well for them. It is hard for those who have had to continue with their care with a clinicians whom they feel did not treat them as they should have been treated in the earlier part of their care.

“I think it is amazing how people interpret accountability.  Generally they do not mean somebody has to be held accountable, but they want to find somebody to be blamed and be pilloried.

“In my inquiry, legally I couldn’t pin blame, but generally neither did I think it right to do so, because there were so many problems that needed to be addressed.  However there often was a refusal to engage in these issues but, rather, a concentration on who knew what and when, which was very unhelpful.

“To me, that seems a really big problem. We find it in the behaviour of politicians and the media.  It’s almost like a witchhunt.  In the case of CervicalCheck, it was deeply toxic and made it very difficult for people trying to keep the Programme going and make it better for the women involved.”

Dr Scally said he believed Health Correspondents in the media were very important because they understood the issues. He thought some of the difficulties which arose in the initial reporting of the CervicalCheck was because the story emerged through the Political Correspondents, whose expertise was in a different area.

He said personally, during the inquiry he had learned much about the power of listening. “I talked to the women, I talked to the families of those who died and some of those conversations were very traumatic. I was amazed by them, they were fantastic people. It was deeply moving to have had the privilege of doing this inquiry.  I am looking forward now to reviewing the implementation of my reports. I am convinced that we are well on the road to making the system work again.

“I am looking forward to seeing how the heath services develop in the Republic   I think the move by Sláintecare to universal health is great and the growing together of health services in the island could play an important role in the future.

Caroline O’Regan, HMI Council Member, who works in the RCSI Institute of Leadership, asked from his experience how would he think we could move towards a system which would support clinical leaders within their service so that they could tell patients the truth and patients could have those three questions answered with compassion and grace. Dr. Scally said there was not one mechanism. The Medical Council should make it clear that there was a duty of candour, people must tell the truth, Colleges and their training programmes needed to address these issues. A proper level of resources was required. The level of resources that had been put into the promulgation of the previous HSE Open Disclosure Policy had been completely inadequate. 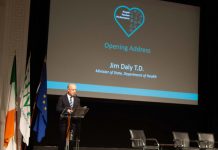 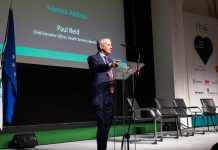