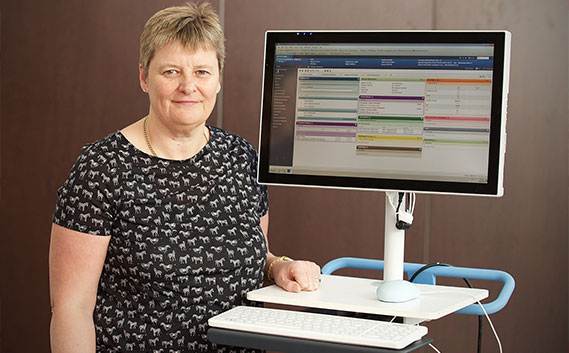 Project Oak, which had been introduced in St. James’s Hospital, had resulted in timely, safer administration of medications, given nurses increased time to care for patients and reduced medication errors due to illegibility and incorrect prescribing, Dr. Grainne Courtney Chief Clinical information Officer St James Hospital told the meeting.

Dr. Courtney said the Project Oak, which was a St. James’s Project with significant funding from the HSE ICT, was established in 2015 to design, build and implement an electronic patient record for inpatient nursing and physician documentation and inpatient EPMA. It went live in October 2018.

It was aimed at providing safer and better patient care and giving staff more time to care through improved processes, standardised care and decision support.
It included physician records for inpatients, all nursing end of bed notes and admission assessments, e-prescribing and meds administration.

It did not include residential care areas, outpatients theatre/IR/endoscopy, Ed (inpatient prescribing for admissions), consent, pre procedure and pre-op checklists, chemotherapy prescribing, insulin prescription, patient contract and nursing care plans (with the exception of 6 on system).

Paper based medication process issues included, missing prescriptions from the bedside, illegibility, prescribing errors and multiple interruptions. It was also time consuming, leading to more contact with teams to clarify, re-char, correct or rewrite prescriptions.
Dr. Courtney said that a total of 2,550 staff were trained. As part of Project Oak, each ward had 6-7 additional workstations on wheels, at least four additional PCs, one PC in the clinic room and two laptops on drug trolleys.

The benefits were the development of an Electronic Patient Record which mean information was not held in separate places by all disciplines, the availability of rich data to inform service delivery and improvements to patient care, improved patient safety through the use of Clinical Decision Support (alerts, rules, allergy checking, interaction checking, reference text etc), multiple and remote user access to record, the ability to standardise safe care for Falls, including Prevention and Management, Nutrition, Infection Prevention and control (including invasive devices), the fact that information could be entered once and shared multiple times and releasing time to care.

Project Oak had resulted in timely, safer administration of medications, giving nurses in one ward area (AMAU) increased time to care for patients by saving 69 minutes per shift and reduced medication errors due to illegibility and incorrect prescribing. It also meant that prescribers were aware of administration times throughout the hospital and provided multiple user access to prescriptions.

She said the critical success factors for the project were that it was patient focussed, it had governance, executive support and was clinically led, had joint funding form the HSE and St. James’s Hospital, the EHR infrastructure was embedded in SJH, there was protected time for health informatics clinicians and training was mandatory.

The next steps would be workflow optimisation, outpatient implementation, biomedical device integration and using it in ED and Theatre.