The search has begun for a successor for Tony O’Brien, who has announced that he will step down from his position as Director General of the HSE this summer.

Mr. O’Brien said he would not be seeking to have his term of office extended when it expires in August.

It is understood that the Public Appointments Service will be holding an open competition to find a successor.  This of course, does not rule out the possibility of the new chief coming from within existing HSE ranks.

In this context, the two HSE Deputy Directors General, John Connaghan Chief Operations Officer and Dean Sullivan, Chief Strategy & Planning Officer must be seen as front runners, if they are interested.  Both were appointed to their current posts last year, when it must have been known that Mr. O’Brien was likely to step down as DG.

Tony O’Brien  has been Director General of the Health Service since July 2013 having served as Director General Designate/Acting CEO He was previously Chief Operating Officer of the Special Delivery Unit, Department of Health and CEO of the National Treatment Purchase Fund (NTPF).

He is Chair of the Health Services Directorate (which has replaced the HSE Board in 2013), and he co-chairs the Emergency Department Task Force since September 2015.

He is Adjunct Associate Professor in Health Strategy and Management at Trinity College Dublin.  He is also Vice President of the Institute of Public Administration (IPA) and a Council Member of the Irish Management Institute (IMI).  In 2016, he was admitted as a Chartered Director (C. Dir.) by the Institute of Directors.

He is currently working towards his Ph.D. in collective leadership.

The salary for the DG post is about €186,000, similar to that for the Garda Commissioner. 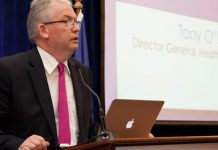