More and more top performing hospitals in the US have doctors in leadership positions, not because they are better  managers but because they are in a unique position to engage with patients and colleagues, Dr. Colm Henry, National Clinical Advisor and Programme Lead for Acute Hospitals told the Conference.

In Ireland there were 55 hospital-based and 18 mental health directorates and the role of the Clinical Directors was evolving, based on local requirements and politics. Clinical Directors were primarily aligned to institutions and had limited regional governance approach until the advent of the hospital groups.

He said making the transition to management was quite difficult for doctors. They were used to focussing on someone right in front of them and not on dealing with 35 trolleys in ED in the morning and how to triage them.

There were differences between the nature of medicine and the nature of leadership. Doctors prescribed and expected compliance, they were focussed on immediate and short term issues and results, they dealt with procedures/episodes, and relatively well-defined problems, they had an immediate or small-team focus, they were used to being the expert and carrying the responsibility, receiving lots of thanks and having the respect and trust of colleagues.

The nature of leadership was to lead, influence and collaborate, they had a short, medium and long-term focus and results, dealt with complex processes over time, had ill-defined and messy problems, worked with larger groups, crossing many boundaries and with an integrated approach. They were used to being one of many experts and sharing the responsibility, to encountering lots of resistance and the suspicion of being a “suit.”

Dr. Henry said that when US President, Lyndon Johnson brought in Medicare and Medicaid in the 1960s, there was a huge jump in expenditure which all Presidents tried to control subsequently, but they learned that when you increased entitlement and access there was no going back.

Most European countries were spending nine per cent of GDP on health care, In 2009, 40 per cent of the entire budget of Massachusetts was spent on medical care and subsidising private health care and a figure of 18 per cent in the US generally.

Reflecting on the changing nature of medicine in Ireland, he said that, when he was a student, for example in the specialty of neurology, there was just one CT scanner in Dublin and treatment was limited and inexpensive. The focus was on diagnosis and palliation, so it was a resource light specialty. In 2014 there was a standard expectation for refined imaging 24/7, and a wide access to disease-modifyng treatments.

Dr. Henry said that in some parts of the US some drug companies were advertising to patients directly on billboards to ask their doctors for particular treatments.

It became in the interests of the governments and hospital managers to look for control mechanisms and the obvious control mechanism was to bring in doctors to regulate and oversee treatment and work out what was good treatment. There had been a shift from a volume to value based health system. There had also been a fundamental re-design clinical care models with emphasis on outcomes and clinical excellence.

It had to be remembered that doctors’ duties to their patients superseded everything including their duty to their employers. So while under their contract doctors might be expected to report to the Clinical Director they could say that ethically and professionally they could not comply with instructions, they could not be responsible for patient safety if cuts were made. Every doctor was responsible in very real terms to the Medical Council, which states that doctors’ paramount professional responsibility is to act in the best interest of patients over employers and colleagues.

It had to be remembered that doctors’ duties to their patients superseded everything including their duty to their employers.

He said demographic changes were going to place increased cost pressures on the health services. Older people were more likely to use acute hospital services, have chronic illnesses and multiple disabilities. The increase in the number of over 85s in Ireland was going to pose a challenge to clinicians and managers. While budgets were being reduced, our population was becoming older and more dependent, medical and surgical programmes had brought about achievements without which things would be much worse. Technology and expectations were also advancing. Expenditure on drugs which could prolong life for a few months was significantly increasing.

In Ireland our capacity for critical evaluation had not been suspended and we needed to question decisions made and directions given. Mid Staffordshire was a failure of compassion. Dov Seidman said that the last era of management was about how much performance we could extract from people. The next is all about how much humanity we can experience. 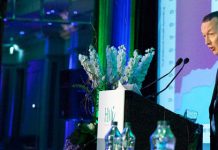 Healthy tension between politicians and managers