A project from Bantry General Hospital to improve the treatment of strokes won a Taoiseach’s award.

Stroke is the third leading cause of death and the leading cause of adult disability in Ireland today. There is strong international evidence that patients with acute stroke who receive care on dedicated acute stroke units have a significantly greater chance of surviving their stroke, regaining independence and returning home.

The Irish Heart Foundation National Audit of Stroke Care in 2008, however, revealed that only one Irish hospital had an acute stroke unit.

“To do this, we initially conducted an audit of all patients presenting to the hospital with acute stroke during 2007. The audit demonstrated that approximately 100 patients present annually and that patients are significantly older, present later and have denser strokes than their urban Irish counterparts.

“We also embarked on an extensive consultation process with patients, relatives, carers and healthcare professionals in primary, secondary and tertiary care to achieve consensus regarding the design and function of the new unit.

“An appropriate, self-contained, geographically-defined space adjacent to the rehabilitation unit was identified for the establishment of a new four-bed acute stroke unit from within the current bed complement.

“Charitable funding was procured to equip the new unit to the desired specification. To help identify unforeseen problems and teething issues, the new unit was trialled for three months at the end of 2008. The unit proper was established in October 2009 and became operational without the provision of any extra resources or staff, but by reconfiguring existing resources, services and staff

“The unit now uses the most up to-date protocols to deliver a high quality, evidence-based acute stroke service in a geographically challenging area. It has also facilitated the safe and efficient provision of thrombolysis in acute stroke for the first time to a rural, isolated population.

“Our thrombolysis rate of ten per cent compares very favourably with the best international acute stroke centres. The unit has led to significantly improved patient outcomes, reduced length of stay and enhanced patient access to multidisciplinary team members and neuroimaging.

“In addition, due predominantly to a 35 per cent reduction in the total number of bed days used by acute stroke patients, the unit has realised cost savings estimated at over €1.2 million annually.” 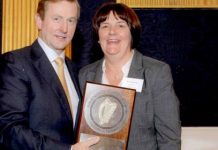